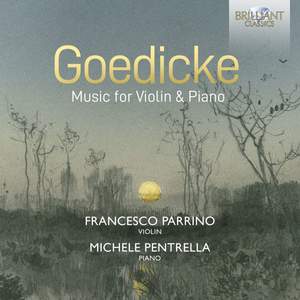 Alexander Fyodorovich Goedicke (1877-1957) was a Russian composer and pianist. At the Moscow Conservatory he proved himself as a piano virtuoso, studying with Vasily Safonov, Anatolij Galli and Paul Pabst, while Anton Arensky was his most important composition teacher. Goedicke won the Anton Rubinstein Competition in 1900. Despite his lack of traditional guidance, his compositional efforts were rewarded when he won the Rubinstein Prize for Composition at the young age of 23. Later he became a professor at the Moscow Conservatory himself, teaching, piano, organ and chamber music. He was Nikolai Medtner's first cousin.

The Violin Sonata in A major No. 1 Op. 10, composed in 1899, bears the nickname "Vesennjaja" ("spring"), a clear reference to Rachmaninov's "Spring Waters", the Song composed in 1896 which is quoted at the beginning of the first movement of the Sonata and at the end of the last one, so as to confer cyclical unity. Goedicke's deep admiration for his slightly older colleague is testified by a way of writing in which he recalls not only the fact that his father had taken him to hear all the concerts of that young prodigy but also that, in 1903, "the performance of my symphony [the First, Op.15] was helped by Sergei Vasilevich, who patronised it and gave me the opportunity to conduct it myself".’

The second Violin Sonata was written between 1948 and 1953, in “formalist Soviet” style, with reminiscences from Haydn to Kabalevsky.