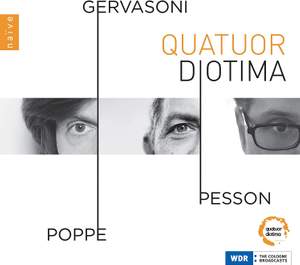 This new showpiece in the Collection Diotima, in which the eponymous quartet devotes itself to monographies of contemporary composers, offers here a triple line-up of some of the foremost composers of their generation: this album is a living image of serious music today, which in this 21st Century has focused on exploring the multifaceted realm of sound. Stefano Gervasoni (b. Italy, 1962), Gérard Pesson (b. France, 1958) and Enno Poppe (b. Germany, 1969) has each, in his own way, renewed the tradition and technique of writing for the string quartet.

In three pieces written between 2005 and 2015, Gervasoni presents new textures and a fragmentation of form, playing with chiaroscuro effects and showing a fascination for silence - that abyss that is the very opposite of sound.

Gérard Pesson, whose three string quartets (1993-2013) are played here by the Diotima Quartet, practices a subtle poetics of erasure, and is not afraid to recycle the past (the music of Brahms, with Pascal Moraguès adding his clarinet to the strings), while his rather elegiac temperament often hovers on the border of silence.

Finally, Enno Poppe, whose style explores “gestures, cells that are encoded and transformed, creating a tissue of infinite ramifications based on perpetual variation” (Martin Kaltenecker, Associate Professor of Musicology at Université Paris Diderot and co-founder of contemporary music magazine Entretemps). Buch (2013-16) shows touches of humour, as well as containing references to the music of Pierre Boulez.

With their usual mastery, the Quatuor Diotima opens the doors to these three different worlds, allowing us to “access levels of beauty and intensity that are rare in our time” (Martin Kaltenecker).