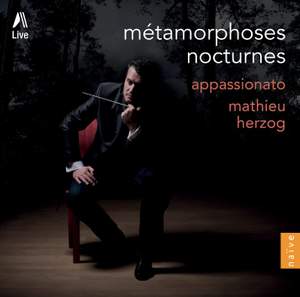 The Schoenberg…might be the best performance of all. I can’t recall a more hushed, breathless, furtive opening…All of a programme, then, brilliantly executed. What will this chameleon of an ensemble... — Gramophone Magazine, February 2022 More…

Schoenberg’s Transfigured Night and the Metamorphoses of Richard Strauss: two postromantic masterworks conjoined ‘con brio’ in this album by Appassionato, the orchestra that has developed so successfully under its director Mathieu Herzog. And as a pendant, Respighi’s all too rarely heard piece Il tramonto, with mezzo-soprano Adèle Charvet.

Marking the creation of its own label, Appassionato here presents a carefully tailored album that confirms its maturity and unique character as a chamber orchestra as well as underlining its appetite for challenging projects. The shared intimacy of tone, harmonic twists and turns and expressionist aesthetic of Strauss’s Metamorphosen, Respighi’s Il tramonto and Schoenberg’s Verklärte Nacht allow the strings of this ensemble - founded in 2014 by Mathieu Herzog - every opportunity to highlight its full range of lines, colours, subtleties and expressive interactions.

“The palpable sense of lyricism and poetry running through these three masterpieces of the postromantic period makes a definite link between them,” explains the conductor. In this musical kaleidoscope, with climax following on climax, the material is always alive, tense, in constant movement, and subject to those transformative metamorphoses that give their name to the album: a showcase for Appassionato’s remarkable degree of flexibility.

The orchestra here reaffirms more than ever its capacity for expressive sound contours within the string textures - augmented as it is by members of major string quartets such as the Ébène, Arod, Hanson, Agate, Wassily, Confluence, Akilone, Mona and the Trio Sōra.

Last but not least, it excels in bringing to life the dramatic narratives underlying this densely packed programme, which also features the voice of mezzo-soprano Adèle Charvet in Mathieu Herzog’s arrangement for voice and string orchestra of the work by Respighi.

This album is a live recording made on 11 September at La Seine Musicale in Paris, where Appassionato are artists in residence. The release will mark the launch of the label Appassionato, which sees the orchestra widening its activities to include record production, while also reinforcing its collaboration with naïve, to give its musical projects the best possible

The Schoenberg…might be the best performance of all. I can’t recall a more hushed, breathless, furtive opening…All of a programme, then, brilliantly executed. What will this chameleon of an ensemble bring us next? Their name was well chosen.

while using such a large body of strings is not always to the benefit of either work, they go well enough together, separated here by Herzog’s own luscious arrangement of Respighi’s Il Tramonto, with the mezzo-soprano Adèle Charvet as the velvety soloist.