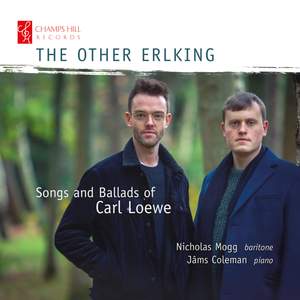 Loewe: The Other Erlking

Mogg is comfortable across the enormous range and demonstrates much of the timbral flexibility these songs need. Coleman’s playing is outstanding…There’s much to admire here, even if Loewe’s... — BBC Music Magazine, February 2022, 4 out of 5 stars More…

Nicholas Mogg and Jâms Coleman explore the remarkable versatility of Carl Loewe in a new release for Champs Hill Records. The Other Erlking sheds a deserved light on Loewe’s less well-known songs and astonishingly arresting ballads, and is the first Loewe album recorded by UK performers. Many of Loewe's ballads form part of the regular Lieder repertoire, but less known and equally deserving are the lyrical Lieder of Frauenliebe, and settings of such poems as ‘Über allen Gipfeln ist Ruh’’ and ‘Der du von dem Himmel bist’ which rival those versions by Schubert, Schumann and others. Loewe has been referred to as ‘the north German Schubert’, a description apparently given to him by Prince Albert in London in 1847. The album takes its name from comparisons with Schubert’s Erlkönig, which Mogg and Coleman performed together in concert: 'We have introduced many audiences to Loewe using a comparison with Schubert’s Erlkönig. While Schubert’s setting is without doubt exhilarating, we were struck by the way Loewe conjured different moods through his choice of colour. It is our hope that this album will show the remarkable versatility of Loewe and encourage exploration of his less well-known works.'

Mogg is comfortable across the enormous range and demonstrates much of the timbral flexibility these songs need. Coleman’s playing is outstanding…There’s much to admire here, even if Loewe’s strengths perhaps don’t extend as far beyond ballads as these musicians would have us believe. We can certainly look forward to their next project.

it’s good to hear these pieces, too seldom represented on disc, and welcome this handsome, intelligent and beautifully recorded debut from two fine artists.