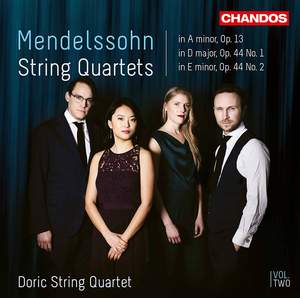 Both [Op. 44 quartets] have long first movements – genial in the D major, more plangent and yearning in the E minor - and it’s a measure of the performances that they capture these moods with... — BBC Music Magazine, January 2022, 5 out of 5 stars More…

Following an exceptional critical reception of their first volume of Mendelssohn Quartets, the Doric String Quartet now completes the project. As in the case of the previous volume, the players juxtapose one of the early quartets (No. 2) with two of the later compositions (Nos 3 and 4), composed a decade or so later. Composed in 1827, the Second Quartet pays homage to Beethoven’s outstanding contribution to the genre (Beethoven died in March of that year), but this is no simple pastiche. It is a confident work, Mendelssohn’s individual voice already clearly present. The later quartets are perhaps less overtly revolutionary – Mendelssohn was now an established figure and a recipient of Royal commissions – but nevertheless remain clear milestones in the development of the genre.

Both [Op. 44 quartets] have long first movements – genial in the D major, more plangent and yearning in the E minor - and it’s a measure of the performances that they capture these moods with precision and a wealth of detail in the colouring and phrasing of individual lines. This never detracts from the unity of purpose in the playing...All in splendid Chandos sound: a winner.

The Doric Quartet here conclude in magnificent style the cycle they began in October 2018...their approach is very much the same – Mendelssohn as red-blooded successor to Beethoven.