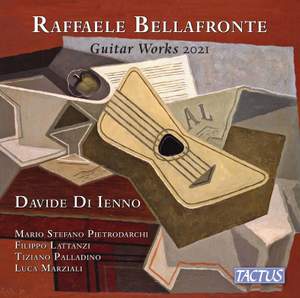 Bellafronte: Running after the Dream

Bellafronte: Suite No. 1 for violin & guitar

After the first Guitar Works (Tactus TC 960203) album, the production dedicated to the guitar by composer Raffaele Bellafronte continues on this new CD by exploring new paths, from the phonic point of view combining the six strings to classical and less usual instruments, and through the writing where the author refers to both classical and popular forms. In this world premiere recording, Davide Di Ienno's guitar plays the role of soloist in two tracks, then confronting himself in chamber dialogues with the bandoneon, violin, marimba and mandolin in a series of compositions that actively contribute to this challenge that throughout the twentieth century left us a lot of precious music.