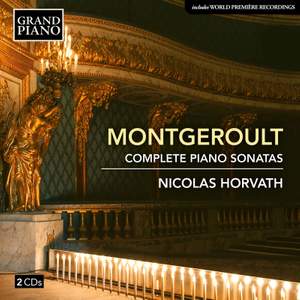 Horvath plays a modern Steinway, but, mindful of the fortepiano on which Montgeroult herself would have played, performs these works with a light, highly articulated sound...It’s the last three... — BBC Music Magazine, January 2022, 3 out of 5 stars (Performance) / 4 out of 5 stars (Recording) More…

HÉLÈNE ANTOINETTE MARIE DE NERVO DE MONTGEROULT (1764–1836) was a student of Clementi in Paris. She survived the French Revolution – during which, as an aristocrat, her life was in grave danger – to become a celebrated pianist, composer and author of a famous piano method. Her compositional language in these nine sonatas is wide and includes Italianate models as well as elements that reflect the influence of Haydn and Mozart, with chromatic and surprising harmonies, contrasts of register, chorale-like nobility and brilliantly athletic finales. Featuring several world première recordings, these sonatas represent a major contribution to the French repertoire of the late Classical and early Romantic periods. The Monaco born, France based, pianist NICOLAS HORVATH is Grand Piano’s most versatile artist. His 17 albums for the label span repertoire from the classical period and until today. Nicolas has received numerous awards, including First Prize at the Scriabin and the Luigi Nono International Competitions, and is noted for concerts of unusual length, sometimes lasting over twelve hours, such as the overnight performance of the complete piano music of Erik Satie at the Paris Philharmonie before a cumulative audience of 14,000 people. His latest project brings to life forgotten masterpieces by French female composers, including world premiere recordings of piano sonatas by Anne-Louise Brillon de Jouy and Helene De Montgeroult. Nicolas is a Steinway Artist.

Horvath plays a modern Steinway, but, mindful of the fortepiano on which Montgeroult herself would have played, performs these works with a light, highly articulated sound...It’s the last three sonatas of 1811 – reaching out into the Romantic era, eloquently performed here by Horvath – which come off best.

Horvath is a conscientious advocate for Montgeroult and his interpretations smooth over things that other interpreters would find stumbling blocks.

In the Ballades it’s the dark, gothic, almost supernatural side to the pieces that comes through especially strongly...In the loudest passages he makes the instrument ring, drawing the maximum resonance out of all those vibrating strings yet somehow still maintaining clarity and definition in each line. In the softest ones, his playing has a beguiling, sometimes dreamlike sweetness.