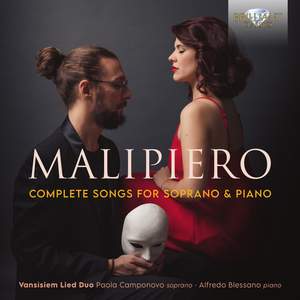 No. 1, Inno a Maria nostra donna

Gian Francesco Malipiero (1882-1973) was born in Venice on 18 March 1882 into a family of musicians. From 1898 to 1899 Malipiero studied briefly at the Vienna Conservatory; from 1899 to 1902 he studied counterpoint with Marco Enrico Bossi at the Venice Liceo Musicale e Società Benedetto Marcello and in 1908 he attended Max Bruch's classes in Berlin. Experiences which exerted a lasting influence on his creative personality were his encounter with early Italian music (Monteverdi, Frescobaldi, Merulo and others) and his stay in Paris in 1913, including his friendship with Alfredo Casella and his attendance of the première of Stravinsky’s Rite of Spring which, as he later said, woke him "from a long and dangerous lethargy."

While Malipiero's early works still manifest strong evidence of Debussy's influence, later on his harmonies move unmistakably in the direction of atonality. Malipiero's goal was giving a new direction to Italian music by fusing the traditions of Gregorian chant, Renaissance, and Baroque music with the expressive means of contemporary musical thought.

Malipiero was a member of the so-called “Generazione dell’Ottanta” composers, together with Pizzetti, Respighi, Casella and Alfano it was their intention to free Italy from the sentimentality of Tosti’s romances and the songs of Puccini and Mascagni, and draw inspiration from great poets such as D’Annunzio, developing the intellectual project of a “niche” art song that could compete with the German Lied and French Mélodie.

These 3 CDs present the complete songs for soprano and piano by Malipiero, sung by the Vansìsiem Lied Duo: Paola Camponovo (soprano) and Alfred Blessano (piano). The Duo is specialised in the performance of the Italian repertoire, in particular of the Generazione dell’Ottanta. The Duo obtained many international awards, including the First Prize at Concorso Internazionale Else Respighi in Verona, devoted to the Italian art song from the end of the 19th and the beginning of the 20th century.