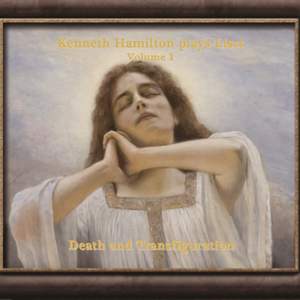 You can think of this impressive release as a two-disc illustration of its title or simply as a pair of satisfying, carefully programmed Liszt recitals...I cannot recommend it too highly. — Gramophone Magazine, February 2022 More…

This is a Liszt recording with a difference: repertoire reflecting love, death and transfiguration, memory and nostalgia, performed by internationally renowned pianist and Liszt expert Kenneth Hamilton.

It goes without saying that Hamilton has intensively studied the original scores of these pieces, but in addition he has sought out and taken seriously Liszt's often ignored recommendations on their interpretation, passed down from the many reminiscences and recordings of students who worked closely with the composer. He has, in effect, tried to think like a Liszt pupil, to immerse himself in a performance tradition that goes beyond the printed text, and to respect Liszt's long legacy of teaching his own music.

New insights abound, even in such popular pieces as the Sonata in b minor: Hamilton's powerful recording reflects not only the interpretative nuances suggested by Liszt, but also adopts a strikingly moving revised reading of the Sonata's final page. The luscious Lorelei likewise incorporates the composer's later improvements, and the renditions of both Funrailles and Bndiction de Dieu profit from Liszt's detailed advice on tempo flexibility, arpeggiation and ornamentation. Insights extend to hidden meanings within the music, as outlined in Hamilton's own notes to the recording. The wonderful second Ballade is revealed as a "love-death" anticipating by several years the Wagner/Liszt Liebestod that ends the album, while the fascinatingly intertwined relationships linking the other pieces are lucidly and elegantly explained. A truly remarkable recording, and a milestone in the history of Liszt performance.

Described by the Moscow Kommersant as "an outstanding virtuoso; one of the finest players of his generation", by Tom Service in the Guardian as "pianist, author, lecturer and all-round virtuoso", and by Stefan Pieper in Klassik Heute as a "pianist, scholar, radical thinker and philosopher", Kenneth Hamilton is well-known as a recitalist and recording artist of emotional depth and striking originality. His CDs have attracted both critical acclaim and a large number of listeners worldwide. His award-winning After the Golden Age: Romantic Pianism and Modern Performance (Oxford University Press) is one of the most internationally influential books on music of recent decades.

You can think of this impressive release as a two-disc illustration of its title or simply as a pair of satisfying, carefully programmed Liszt recitals...I cannot recommend it too highly.

The performances never duck any of the considerable technical challenges that the piano writing regularly presents, but never seem to regard them as an end in themselves...there’s directness, clarity and an absolute lack of unnecessary point-making in everything Hamilton does.