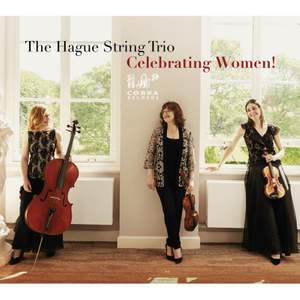 [Smyth's] String Trio – like the other works in this collection – receives its first outing here and again shows Smyth to be capable of powerful, idiomatic writing. The Hague String Trio prises... — BBC Music Magazine, January 2022, 3 out of 5 stars (Performance) / 4 out of 5 stars (Recording) More…

The album Celebrating Women! is a collection of previously unrecorded string trios by female composers from the late 19th and first half of the 20th century.

Through this recording The Hague String Trio aims to celebrate the discovery of these string trios as well as promote and shine a light on female composers who, in the past, have so often been overlooked. The CD presents a wonderful quartet of four women composers, each with their own personal musical voice; refreshing and intriguing and all four with fascinating biographies, diverse cultural backgrounds, coming from four different countries and no less than three different continents.

The main work of the album is the impressive, romantic string trio by the English composer Dame Ethel Smyth, whose name and work is gradually gaining greater recognition. Her string trio, composed during her studies in Leipzig, is perhaps the only large scale string trio composed by a woman in the 19th century. In addition to this magnificent trio, The Hague String Trio presents a lyrical string trio by the Australian Miriam Hyde composed during her studies at the Royal College of Music in London; a suite of five sparkling miniatures by the Dutch composer and violinist Emmy Frensel Wegener, and a glorious fugue by the African-American composer Irene Britton Smith, a composer and school teacher from Chicago.

The Hague String Trio was founded by Justyna Briefjes, Julia Dinerstein and Miriam Kirby in 2006. They came together to share their love for chamber music and have formed a strong bond over their many years as an ensemble. The trio enjoys exploring the extensive string trio repertoire, from treasured masterpieces to lesser known compositions which they feel deserve more recognition. They work closely with composers such as Robin Holloway, Kerry Woodward, Arne Werkman and Reza Nakisa as well as fellow musicians including oboist Pauline Oostenrijk & pianist Daniel Kramer. The Hague String Trio performs throughout the Netherlands, and gives concerts every year in England and Germany, where it has built up devoted followings. Their COBRA album After the Darkness, released in 2019, received a great deal of media attention and many wonderful reviews both in the Netherlands and abroad.

[Smyth's] String Trio – like the other works in this collection – receives its first outing here and again shows Smyth to be capable of powerful, idiomatic writing. The Hague String Trio prises open the lengthy Allegro to reveal the richness of the interior movements, and, if not quite joy, satisfaction in the dance-like finale.