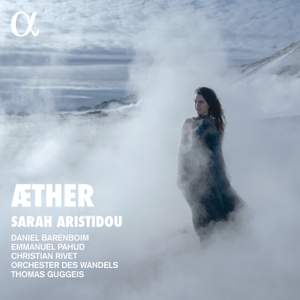 Can you capture the ineffable? Sarah Aristidou’s remarkable debut disc Æther explores things within and beyond. She is duly shrouded in mist for the booklet pictures, but there is nothing the... — BBC Music Magazine, January 2022, 5 out of 5 stars (Performance) / 4 out of 5 stars (Recording) More…

Adès: Ariel's Song (from The Tempest)

The French-Cypriot soprano Sarah Aristidou joins Alpha and here presents her very first album. Twice named ‘Best Newcomer’ by Opernwelt for two contemporary creations, she is a favourite interpreter of Jörg Widmann who has already written two works for her, and has sung under the direction of Daniel Barenboim, Sir Simon Rattle and François-Xavier Roth. Barenboim opened the doors of Berlin to her and the Orchester des Wandels (Orchestra of Change), a group of musicians from several German orchestras, including the Staatskapelle Berlin, who have set themselves the objective of practising their art in a way that protects the planet: limiting the carbon footprint in all their activities, including this album. The disc packaging is plastic-free and printed with organic ink. Alpha also supports the reforestation programme in Madagascar initiated by the orchestra. In addition to the encounter between the young singer and the unique orchestra, this project is also the result of Sarah’s passion for Iceland (the land of Aether par excellence?). Along with the director and photographer Weronika Izdebska, she has created a film exalting the natural world which will be shown in Berlin in November 2022 as part of an installation presenting the entire programme.

Can you capture the ineffable? Sarah Aristidou’s remarkable debut disc Æther explores things within and beyond. She is duly shrouded in mist for the booklet pictures, but there is nothing the least bit wispy about either her formidable coloratura singing or the exceptional programming here.

Guggeis proves a fine conductor over the album’s wide stylistic range…Playing and choral singing are consistently beautiful, and the instrumental contributions from Barenboim, Rivet and Emmanuel Pahud are excellent, as one might expect.