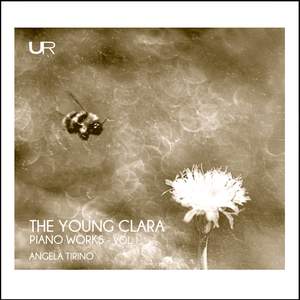 This Album tackles some of Clara Wieck Schumann most representative early works, from the Polonaises op. 1 (written when she was 13) to the sonata in G minor (composed at the age of 20). These pages show the environment in which the young Clara grows artistically, namely pianism of "virtuosity" (under the authoritative, at times even oppressive, guidance of her father Friedrich), the influence of Chopin (the Soires Musicales op.6 ), the almost statutory homage to the Viennese tradition (the Souvenir de Vienne op. 9 dedicated to the Empress of Austria) and, equally obligatory, the sonata that, together with the Romances op. 11, marks the passage to a second, more mature phase magnificent yet tormented - of her life and poetics.

ANGELA TIRINO made her discographic debut in duo with the complete recording for four-handed work for piano by late romantic author H. von Herzogenberg (Brilliant, 2020), which receives fl attering reviews from the most important music magazines. Angela is a piano teacher at the Academy of Music in Florence, and this is her first solo album as a soloists.