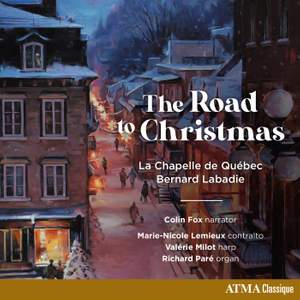 The Road To Christmas

trad.: Down in yon Forest

I. Text: Introduction (The Road To Christmas)

III. Text: The Tree Of Jesse

V. Text: The Mystery Of The Night

VI. Text: The Song Of The Angels

X. Text: The Adoration Of The Magi

XI. Text: The Massacre Of The Innocents

"The Road to Christmas is my ideal Christmas; it's made up of music that is often simple, but presented with the greatest care, and texts that allow us to dive into the roots of the event. Everyone can find the Christmas of their dreams, whether through music, poetry, spirituality or a happy mixture of the three." - Bernard Labadie (Founder of Les Violons du Roy and Musical Director of La Chapelle de Quebec)

For Bernard Labadie, Le Chemin de Noel is the realisation of a great dream inspired by the tradition of the annual Christmas concerts at the Chapel of King's College in Cambridge, England.

Named after the beloved annual concerts that Labadie has conducted in Quebec since 2016, Le Chemin de Noel is the conductor's deeply personal reflection on the meaning on Christmas.

This musical, spiritual, and poetic itinerary unfolds through traditional Nativity hymns that Labadie has carefully selected over the years. The sacred and secular repertoire is sung by La Chapelle de Quebec, with the participation of contralto Marie-Nicole Lemieux, harpist Valerie Milot, and organist Richard Pare.

The program also includes the canticle Mais ou sont les neiges...?, a creation by Franois Dompierre on a text by Denys Arcand.

Two digital versions of the album will be released, one in French, the other in English. The French version includes a reading by Yves Jacques from Ernest Myrand's Noels anciens de la Nouvelle-France, the first historical study of a subject related to music in Canada.

The narrator for the English version is Colin Fox. The cover art for this album rooted in Christmas tradition features a painting by Quebec artist Patricia Bellerose.

Created in 1985 by founding conductor and music director Bernard Labadie, La Chapelle de Qubec is one of North America's premiere vocal ensembles. The group is made up exclusively of hand-picked professional singers from all over Canada.