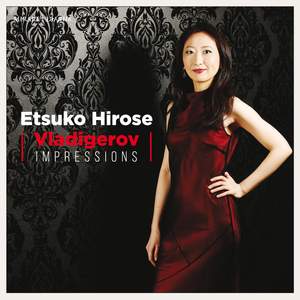 Hirose emphasises the Scriabin influence and taps the emotional depth for the elegiac end of a romance. — BBC Music Magazine, February 2022, 3 out of 5 stars (Performance) / 4 out of 5 stars (Recording)

Born in Nagoya in Japan, Etsuko Hirose began studying the piano at the age of three. When she was six she performed Mozart’s Piano Concerto no.26 with an orchestra. After pursuing her studies at the Ecole Normale de Musique de Paris and at the Conservatoire National Superieur de Musique et de Danse de Paris in the class of Bruno Rigutto and Nicholas Angelich, she has received the guidance of Alfred Brendel, Marie-Francoise Bucquet and Jorge Chamine.

A prizewinner at prestigious international contests such as the Frederic Chopin Competition for young pianists (Moscow), the G. B. Viotti and the Munich ARD Competition, she won First Prize at the Martha Argerich Competition in 1999, which launched her solo career.

Her performances are regularly broadcast, notably on Arte, France 3, France Musique, Radio Classique and the NHK. She has recorded numerous discs for Denon, Danacord and Warner. Her first recording for Mirare was a Chopin recital, then came a CD devoted to the Liszt and Schumann concerti accompanied by the Orchestre de Pau Pays de Béarn and in addition recordings of Balakirev and Lyapunov.

“A captivating character, lit up with joy and bursting with energy, Vladigerov created a universe of his own, exploring the tremendous orchestral potential of the piano.” - Etsuko Hirose

“Such a work comes along maybe once in a century!” These were the words of Dmitri Shostakovich after listening to the great symphony ‘A Jewish poem op 47’ (1950) by Pancho Vladigerov. Admired by the composer’s leading colleagues Richard Strauss, Aram Khachaturian or Dmitri Shostakovich, Vladigerov’s multicoloured music, imaginative and brimming with life, succeeded in artfully blending the elements of western music, jazz, Hollywood-style themes with Bulgarian popular music.

The composer and musical critic Tz Tzankov praised “the wild, frantic passion with which Vladigerov galvanizes the listeners so that even the least likely to get immersed in art are maintained in an almost electric state. It feels as if he seized blazing sounds with both hands and threw them into the listeners’ souls with his gifts of genius.”

Hirose emphasises the Scriabin influence and taps the emotional depth for the elegiac end of a romance.