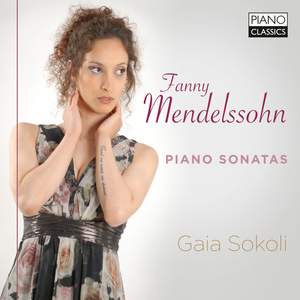 [Ostersonate] a work of tremendous emotional depth, whether in the serene beauty of the opening of the second movement...or in the shocking vehemence that opens the finale or in the surprising... — Fanfare, May/June 2022 More…

• The figure of Fanny Mendelssohn (1805-1847) is still awaiting an adequate revaluation. The elder sister of Felix Mendelssohn, four years younger than her, Fanny was born in Hamburg in 1805 into a very wealthy family. Their father Abraham was a banker and took particular care in the education of his children, who had the privilege of a very high profile cultural (not just musical) education in Berlin, where the family moved in 1812. Fanny and Felix studied composition with Karl Zelter, who gave them an excellent foundation in contrapuntal technique, and piano with Ludwig Berger, a pupil of Hummel. Fanny was also a piano virtuoso and often performed in Sunday domestic concerts in their Berlin home, also in duo with her brother Felix. Only in 1845 did Fanny decide to publish her first composition under her own name, since she had always been discouraged (not to say opposed) in her public activity as a composer, by her brother and the rest of her family. So her father wrote to her in a letter dated July 16, 1820: “Music will perhaps become his [Felix's] profession, while for you it can and must be only an ornament”.

• This new recording presents the three Piano Sonatas. The early compositions are compatible with the generic definition of "Mendelssohnian", as they present stylistic elements common to Felix's language, but Fanny's language, with the progressive liberation from her family of origin, gradually conquers an originality that takes on the most convincing tones precisely in the Sonata in G minor.

• Played with conviction, feeling and brilliance by the young Italian pianist Gaia Sokoli. The excellent booklet notes are written by her teacher, Roberto Prosseda, one of the foremost pianists of Italy and Mendelssohn specialist.

• An important recording and tribute to a long underrated, female composer!

[Ostersonate] a work of tremendous emotional depth, whether in the serene beauty of the opening of the second movement...or in the shocking vehemence that opens the finale or in the surprising chorale that ends it. First-rate sound rounds out an auspicious introduction to a pianist to watch.