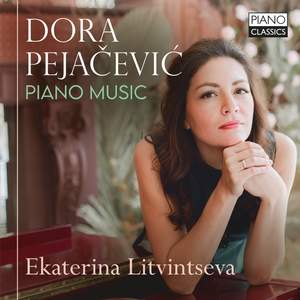 [Litvintseva] Her tempos are flexible, but her rubato never threatens the music’s line (note, as but one example, the way she navigates the tempo shifts in the slightly off-kilter Caprice-Waltz... — Fanfare, May/June 2022 More…

• Born in Budapest in 1885 as Maria Theodora, Dora Pejačević grew up as a member of the Croatian aristocracy, the daughter of a Hungarian-Croatian Count and a Hungarian Baroness. Dora’s musical gifts were recognized and encouraged at an early age by her mother, who was herself a trained pianist and singer. When the family moved from the family estate of Našice (now in Croatia) to Zagreb in 1903, she began to study music more seriously, still in a private capacity, with professors at the Croatian Music Institute. By that point she had already composed several works under the influence of Romantic composers such as Mendelssohn, Schumann and Grieg. Later she studied in Dresden and Munich and received lessons in instrumentation, composition (from Percy Sherwood) and violin (from Henri Petri in Munich). She was largely self-taught, however.

• Though firmly rooted in the Romantic tradition, with hints from French Impressionism, Pejačević found her own compositional voice, a major figure in Croatian cultural life and a shining beacon for all female musician-composers. She died in Munich in 1923.

• Ekaterina Litvintseva is one of the most remarkable pianists of her generation. Her recordings won her enthusiastic acclaim in the international press: “a notable moment in the history of Chopin interpretation” (Fanfare); “a sense of spontaneous invention” in Mozart’s K.271 (Gramophone) and “an expressive depth” in Brahms’s 1st Piano Concerto (BBC Music Magazine).

[Litvintseva] Her tempos are flexible, but her rubato never threatens the music’s line (note, as but one example, the way she navigates the tempo shifts in the slightly off-kilter Caprice-Waltz No. 2); her balances are lucid; and her technique easily meets the needs of the music.