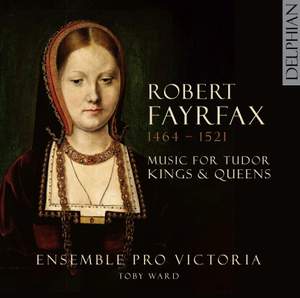 Fayrfax: Alas, for lak of her presens

Fayrfax: Most clere of colour

Fayrfax: I love, loved, and loved wolde I be

Fayrfax: That was my woo

In that golden age of British choral music half a millennium ago, when polyphonic voices soared in the vaulting of the great late-Gothic churches and chapels that seemed to have been built for them to fill, one composer was in especial favour with the royal family: Robert Fayrfax.

A newly reconstructed movement from a mass for the private wedding of Henry VIII and Catherine of Aragon, later treasured in darker times by the recusant gentry for its Catholic associations, sits here alongside exuberant masterpieces from the Eton Choirbook and, in intimate contrast, Fayrfax’s seven surviving courtly songs, brought together on a single recording for the first time.

An exciting new signing for Delphian, Ensemble Pro Victoria’s young professionals bring both freshness and individuality to Fayrfax’s music in the five hundredth anniversary year of his death.