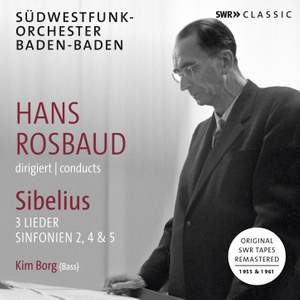 Rosbaud is not generally recognised as a conductor of Sibelius’ works to the extent that he is as an interpreter of the music of Mozart, Mahler, Strauss or the radical modern music of the 1950s. Music enthusiasts with high expectations, however, got to know him as a result of the well-received 1954 recording he made for Deutsche Grammophon of some of the Finnish composer’s shorter orchestral works. Rosbaud combined a meticulous approach, unmistakable intuition, extensive experience with complex genres and extraordinary liveliness. His studio recordings from 1955 and 1961 of three Sibelius symphonies and three songs for voice and orchestra clearly demonstrate his optimum artistic approach to the music of the great Finnish master.