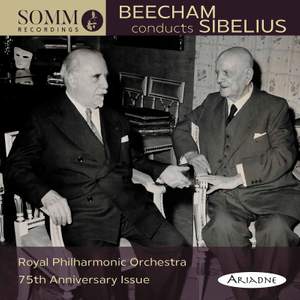 evidently taped off-air with less than the highest end equipment. Yet what comes through is a blazing performance – further evidence that Beecham was evidently far more inspired live than is... — BBC Music Magazine, March 2022, 4 out of 5 stars More…

"SOMM Recordings is thrilled to announce the first release on disc of the only known live recording of Sir Thomas Beecham conducting Sibelius’s Symphony No.1 with the Royal Philharmonic Orchestra to mark the orchestra’s 75th anniversary. The disc has been curated by Tolansky, the original founder of the Music Performance Research Centre. The archive was created in 1987 to preserve the heritage of public performances which included among its collection the Sibelius First Symphony. In 2001 the archive was renamed Music Preserved and transferred to the Borthwick Institute at the University of York. The Symphony, together with Tolansky’s other discovery, Scènes historiques have been brilliantly restored by acclaimed engineer Lani Spahr. SOMM’s ground-breaking The Beecham Collection spans 24 volumes, many of them with the RPO. It includes the partnership’s coupling of Sibelius’s Fourth and Sixth Symphonies (SOMM-BEECHAM 18) and their earliest-known recordings, dating from 1946, featuring Wagner, Mendelssohn, Mozart’s 'Great C minor' Symphony (No.40), and Schumann’s Piano Concerto with Moura Lympany the soloist (SOMM-BEECHAM 19)."

evidently taped off-air with less than the highest end equipment. Yet what comes through is a blazing performance – further evidence that Beecham was evidently far more inspired live than is reflected in his sometimes more wayward studio recordings.