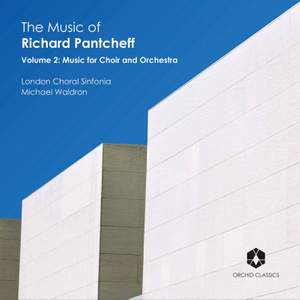 Pantcheff: A Prayer of St. Columba

Pantcheff: Litany to the Holy Spirit

Orchid Classics presents its second volume of choral music by Richard Pantcheff in world-premiere recordings performed by the London Choral Sinfonia directed by Michael Waldron, with tenor Nick Pritchard, and Peter Mankarious on trumpet and flugelhorn. The composer has orchestrated a number of the pieces specifically for this recording. With an emphasis on Pantcheff’s larger-scale output, this second volume brings together a rich selection of works by this composer right across the spectrum of his oeuvre. It includes works for unaccompanied choir, choral/vocal pieces with string orchestra (including solo brass), and two works for orchestra and solo brass alone. Many of the choral works featured date from the periods in Pantcheff’s life when he held musical appointments at Christ the King, Frankfurt, (1993-1995), including the unaccompanied Evening Canticles and uplifting Laudem Dicite; and St. George’s, Johannesburg (2010-2019), including his Missa Brevis, the anthem Domine Exaudi and the meditative Prayer of St. Columba.