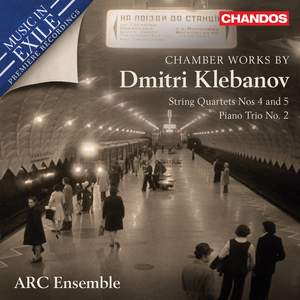 The Toronto-based ARC Ensemble appears to be going from strength to strength in their quest to bring to our attention a whole roster of composers whose careers were unjustly blighted by political... — BBC Music Magazine, December 2021, 4 out of 5 stars (Performance) / 5 out of 5 stars (Recording) More…

Klebanov: Trio No. 2 for Piano, Violin and Cello

The ARC Ensemble (Artists of The Royal Conservatory) is among Canada’s most distinguished cultural ambassadors. It focuses on researching and recovering music suppressed under the totalitarian regimes of the twentieth century and marginalised thereafter. Exile is generally associated with geographical displacement, but the idea of ‘internal exile’ has long had currency. There was a protracted variety of this exile in the Soviet Union: State oversight of musical style and substance began in the 1920s and persisted until well after Stalin’s death, in 1953. Unlike the Central European composers who were murdered or exiled under National Socialism, and whose music is now being assessed and revived, a great number of the musical casualties of the Soviet era still await serious attention.

The Toronto-based ARC Ensemble appears to be going from strength to strength in their quest to bring to our attention a whole roster of composers whose careers were unjustly blighted by political suppression...To my mind, [the Fifth Quartet] is the strongest work in the programme, and suggests that there is an urgent need to hear more music by this prolific and fascinating composer.

Performances and recording are to the customary high standards of this series, while Simon Wynberg’s notes provide valuable perspective on a composer whose music, judging from that heard here, is worth further exploration.