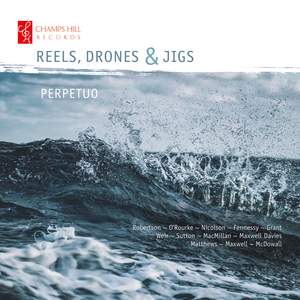 Nicolson, A: The Insomniac's Jig (or Ms Humphreys' Lilt)

Weir: Airs from Another Planet

Matthews, D: A Song for Max

McDowall, C: Subject to the Weather

For its solo debut, Perpetuo ensemble presents Reels, Drones & Jigs inspired by the tumultuous weather and landscape of the British Isles. The pieces recorded here, several for the first time, flow from the land and the traditional music of those who survived or struggled because of it. There are laments and sad airs, jaunty dances and haunting echoes of the past from such composers as Judith Weir, James MacMillan, Peter Maxwell Davies, David Matthews and Aidan O’Rourke. Perpetuo founder James Turnbull comments: 'At its heart this repertoire reflects the way in which composers have been inspired by traditions while breathing new life into the ideas they explore. Perpetuo works in much the same way. We love discovering new music and making it appealing and relevant to new and existing audiences.'