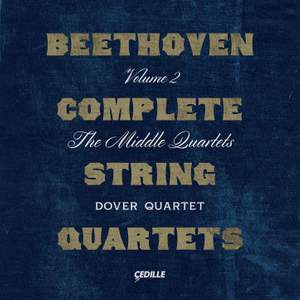 The rich, beautiful sonority that opens op. 59/1, aided by close-up miking, is captivating. There is perfect unanimity in the phrasing and ensemble balances. The Dover Quartet has performed three... — Fanfare, Jan/Feb 2022 More…

The Dover Quartet, 'the young American string quartet of the moment' (The New Yorker) unveils the second installment in its critically acclaimed Beethoven quartet cycle on Cedille Records. The Dover’s three-disc set of Beethoven’s 'Middle Quartets' includes the three Op. 59 'Razumovsky' Quartets, infused with Russian folk tunes; the graceful 'Harp,' Op. 74, named for its plucked string figures; and the intense Op. 95 'Serioso,' a forward-looking experiment that Beethoven originally intended 'for a small circle of connoisseurs.' The Dover Quartet’s first Beethoven release, a traversal of the Op. 18 quartets, has garnered international praise. England’s The Strad said the ensemble exhibits 'a beguiling freshness and spontaneity that creates the impression of these relatively early masterworks arriving hot off the press.' In concert, the quartet has presented three complete Beethoven cycles, including the University at Buffalo’s famous 'Slee Cycle' — which has offered annual Beethoven quartet cycles since 1955 and has featured the likes of the Budapest, Guarneri, and Cleveland Quartets.

The rich, beautiful sonority that opens op. 59/1, aided by close-up miking, is captivating. There is perfect unanimity in the phrasing and ensemble balances. The Dover Quartet has performed three complete Beethoven cycles in recital along with many readings of individual quartets, and their experience shows.