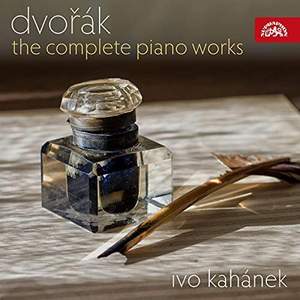 It’s a great set that all lovers of quality Romantic piano music should investigate without delay. — Gramophone Magazine, December 2021

Dvořák: Polka in E major, B3

Dvořák: Theme and Variations in A flat major, Op. 36

Dvořák: Impromptu in D minor, B129

Antonín Dvořák needs no introduction – neither in his homeland nor anywhere else in the world. But how widely known are his piano works? The Piano Concerto in G minor has recently enjoyed a degree of revived interest, yet Dvořák’s pieces for solo piano are in the main an unexplored landscape even for many pianists and musicologists. More’s the pity! They do not possess Chopin’s sway and finely nuanced emotionality, or Liszt’s ostentatious virtuosity. Just as he did in his entire oeuvre, in his piano works Dvořák eschewed flashiness, focusing instead on tender intimate lyricism, teeming with ideas, and shaping even his miniatures with the sensibility of a genius. Such music is certainly worthy of a new complete recording. The challenge was undertaken by Ivo Kahánek, an artist whose recording of Dvořák’s difficult Piano Concerto made with the Bamberger Symphoniker conducted by Jakub Hrůša has deservedly gained critical acclaim and even won the coveted BBC Music Magazine Concerto Award. The present 4-CD set encompasses cycles (Silhouettes, Poetic Moods and the Suite in A major, composed in the US, which Dvořák himself valued greatly), occasional pieces, as well as several littleknown works, recorded for the very first time. One such is the polka Forget-me-not, Dvořák’s first surviving miniature, written when he was 14 years of age. The recording of piano works provides yet another precious insight into the abundant world of the composer’s soul.

It’s a great set that all lovers of quality Romantic piano music should investigate without delay.