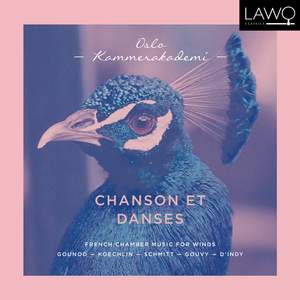 Flutist, composer, and teacher Paul Taffanel (1844-1908) was to have a decisive influence on the development of chamber music for winds in France. While his work as a flutist and educator can in no way be undervalued, Taffanel's musical career extended far beyond this. He was also a renowned composer and conductor, and had considerable entrepreneurial talent. In 1879 he founded the Society of Chamber Music for Wind Instruments whose objective was to expand and promote chamber music repertoire for winds.

Taffanel took the classic octet as his starting point, the orchestration that had given rise to the Harmonie music of Mozart and Beethoven's time, but the society also aimed to profile soloists and bring new French and foreign works to light.

Their concerts were commended: "A group of artists have just met with the commendable goal of making chamber music for wind instruments better known, something we have far too much neglected at our concerts."

On this recording, the Oslo Kammerakademi performs chamber works for winds by composers Charles Gounod, Charles Koechlin, Florent Schmitt, Theodore Gouvy, and Vincent d'Indy, several of which were composed for the Societe de musique de chambre pour instruments a vent.