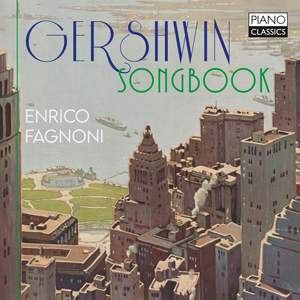 No. 6, I'll Build a Stairway to Paradise

No. 17, That Certain Feeling

No. 6, I'll Build a Stairway to Paradise (Arr. E. Fagnoni for piano)

George Gershwin (1898-1937, born Jacob Bruskin Gershowitz, of Jewish- Ukraine origin) was an American composer and pianist whose compositions span both popular and classical genres, fusing the two in a unique and unprecedented way.

Gershwin studied piano under Charles Hambitzer and composition with Rubin Goldmark, Henry Cowell, and Joseph Brody. He began his career as a song plugger but soon started composing Broadway theater works with his brother Ira Gershwin. He moved to Paris intending to study with Nadia Boulanger, but she refused him. He subsequently composed An American in Paris, returned to New York City and wrote Porgy and Bess with Ira and DuBose Heyward, becoming one of the most important American operas of the twentieth century and an American cultural classic. He moved to Hollywood and composed numerous film scores. His compositions have been adapted for use in film and television, with several becoming jazz standards recorded and covered in many variations. • In his “Songbook for Piano” Gershwin presented piano solo arrangements of 18 of his most famous songs, including The Man I Love, Fascinating Rhythm, Swanee, Do It Again and I Got Rhythm. • In this new recording Italian pianist Enrico Fagnoni plays the complete Songbook for piano by Gershwin, as well as his own arrangement of the same 18 songs, maintaining the original style but adding from his own vast experience of both a classical and jazz pianist, a fascinating comparison!

Enrico Fagnoni studied piano with Vincenzo Vitale and later he went on studying composition and as orchestra director. At the age of ten, he performed at San Carlo Theatre in Naples, gaining the attention of Nino Rota. In the USA he played with the famous clarinetist Benny Goodman.