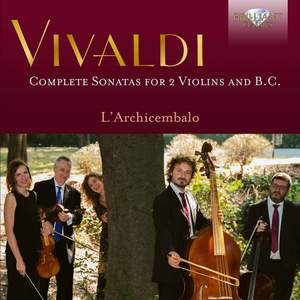 Vivaldi: Sonata for Two Violins and optional Continuo in B flat major RV 77

• This 3-CD set contains Vivaldi’s (1678-1741) complete Sonatas for two violins and basso continuo, taken from the Trio Sonatas Op.1 and Op.5. The early sonatas Op.1 were clearly influenced by Corelli, both in form and style; the 4 or 5 movements consist of dance forms, preceded by a Preludio, and the style is brilliant and virtuoso in the fast movements, while the slow movements reveal how the human voice acted as a model, paving the way for his future ventures into opera.

• Played on period instruments by L’Archicembalo, a young and exciting Early Music group from Italy. The two violins are accompanied by cello, violone and harpsichord.

• L’Archicembalo’s previous recording for Brilliant Classics, the string Symphonies by Vivaldi, received excellent reviews: “...a broad description of their sound would be that it’s as energetic, exuberant and rhythmic as you’d expect from Vivaldi performances...” (Gramophone), “...As soon as I heard them I was electrified. A new interpretation that is lively and harmonious, a blessing and an absolute stimulus for my ears”. (Bettina Winkler, SWR).