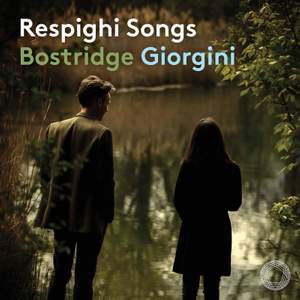 A selection from the two sets of Sei Liriche yields the sensual ‘O falce di luna’ and seductively rippling ‘Au milieu du jardin’, where both Bostridge and pianist Saskia Giorgini are at their... — BBC Music Magazine, December 2021, 3 out of 5 stars (Performance) / 5 out of 5 stars (Recording) More…

No. 2, Within a Mile of Edinburgh

No. 3, My Heart's in the Highlands

After their acclaimed recording of Schubert’s Die schöne Müllerin, Ian Bostridge and Saskia Giorgini present a programme of rarely-recorded songs by Ottorino Respighi. This selection of songs demonstrates Respighi’s stylistic versatility and broad literary inspiration, from settings of Ada Negri’s compact verses to florid, Symbolist d’Annunzio poems as well as folk melodies, including Scottish songs. Respighi’s Liriche unveil a fascinating, little-known Italian branch of musical Impressionism. What binds them together is a longing for a past still so close, but at the same time inevitably gone.

Ian Bostridge is one of the most celebrated tenors and lied interpreters of his generation. His PENTATONE recording of Schubert’s Winterreise (2019) was crowned with the ICMA Vocal Music Award 2020. He continues his congenial collaboration with pianist Saskia Giorgini on PENTATONE.

A selection from the two sets of Sei Liriche yields the sensual ‘O falce di luna’ and seductively rippling ‘Au milieu du jardin’, where both Bostridge and pianist Saskia Giorgini are at their sensitive best. The pair capture the sombre drama of ‘Nebbie’ without overpressing, and bring a pleasing cheeriness to ‘Bella porta di rubini’ from the Canti all’antica.

Giorgini’s pianism is an enormous asset throughout this program. As for Bostridge, he is content to let the music speak for itself, perhaps because these songs do not deal with extreme emotions. The result is captivating. He characterizes the Scottish songs, but not to the point of caricature or over-statement. To reiterate, this disc is a delightful surprise and highly recommended.

Soon he establishes a strong sense of cantabile, serving the rhapsodic qualities of the Italian text, reimagined with his own singular vocal resources.