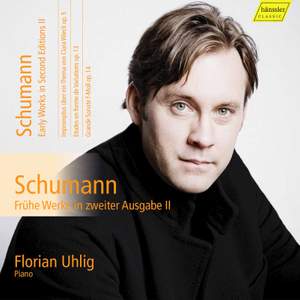 Schumann: Variations (Impromptus) on a Theme by Clara Wieck, Op. 5

"For over 60 years, repeated efforts have been made to capture on sound carriers (first vinyl, then CD) Robert Schumann's Complete Works for Piano solo, a fascinatingly broad and varied spectrum ranging from highly virtuosic pieces for the concert hall and valuable literature for teaching purposes. The first true complete recording of Robert Schumann's works for piano solo on 17 CDs (in 15 volumes), played by Florian Uhlig, seeks for the first time to offer imaginative compila­tions on CD (e.g. ""Robert Schumann and the Sonata"", ""The Young Piano Virtuoso"", ""Schumann in Vienna"", ""Schumann and Counterpoint"", ""Variations"") containing all origin al works for piano­forte written between 1830 and 1854 according to the newest critical editions and/or flrst editions. Several of these CDs include premiere recordings. Florian Uhlig was born in Dusseldorf. He studied in London at the Royal College of Music and the Royal Academy of Music. Florian Uhlig made his orchestral debut at the Barbi can in London in 1997. Since 2019 he holds the position of a Professor of Piano at the Musikhochschule LUbeck."