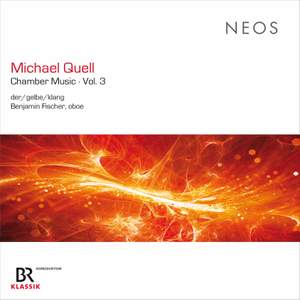 String I for oboe solo was recorded by Benjamin Fischer, who also premiered the piece in 2013. The chamber music works are interpreted by the Munich ensemble der/gelbe/klang, which is presenting a brilliant debut album with this recording.

Scientific thinking is part of Michael Quell's essence. When he talks about theoretical physics, it becomes clear that he really wants to get to the bottom of things. But he is a musician, and in the end his engagement with string theory or with dark energy is an artistic one through and through. The highly complex structure of his music discharges, in a way, into sensual sound.