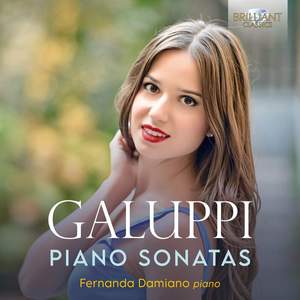 Galuppi: Piano Sonata No. 3 in A major

· Born on the island of Burano in the Venetian lagoon, Baldassare Galuppi trained as a teenager with Antonio Lotti, first organist at the Basilica San Marco. His talents were soon in demand, and Venetian theatres engaged him as a keyboard player and composer, in which capacity he successfully wrote music for several occasions.

· As Galuppi’s fame spread he became known as ‘Il Buranello’, after his birthplace, and as his operas travelled, so did he – first to Mantova, then London (1741-3), Vienna (1748), Madrid (1749) and as far afield as St Petersburg, where he served as court composer to Catherine the Great from 1765 to 1768, all the while producing one successful opera after another. Having returned home to Venice for good in 1768, he turned his energies to sacred music, and continued composing into old age.

· Galuppi’s style was defined during his lifetime as ‘gay, lively and brilliant’, and the three adjectives aptly describe the two published sets of six keyboard sonatas published during his lifetime as Opp. 1 and 2. He used elementary sonata-allegro forms, ranging from the simple binary dance forms of the Baroque to mono- and bi-thematic sonata-forms with embryonic development sections and complete recapitulations, as found in the works of Domenico Scarlatti, Pergolesi, and early Haydn. The texture is generally two-voiced, with right-hand cantabile melodies supported by a straightforward left-hand accompaniment of broken chords or Alberti bass figuration.

· “The young pianist Fernanda Damiano is a real marvel; she has a very remarkable pianism. She is destined, I am sure, to a very brilliant career” (Aldo Ciccolini). Fernanda Damiano, born in 1995, is the winner of several international piano competitions. Recently she worked with Enrico Pace at the famous Imola Piano Academy.