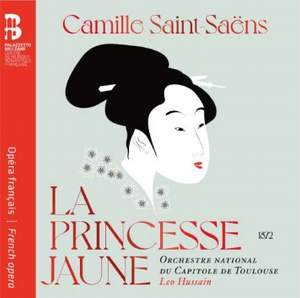 That globetrotting composer Camille Saint-Saëns wrote La Princesse jaune in 1872, exemplifying the current craze for all things Japanese. Kornélis, played by the tenor Mathias Vidal, dreams only of the Land of the Rising Sun. Under the influence of a hallucinogenic potion, he becomes infatuated with Ming, a fantasy princess. His cousin Léna – the soprano Judith van Wanroij – despairs of this passion and does not dare to confess her own feelings to Kornélis, who eventually comes to his senses. The running time of this opera enables us to offer a coupling in the shape of a previously unrecorded version of Saint-Saëns’s six Mélodies persanes, thus extending the guiding thread of a yearning for exotic horizons in another direction. Leo Hussain conducts the Orchestre National du Capitole de Toulouse in both works.