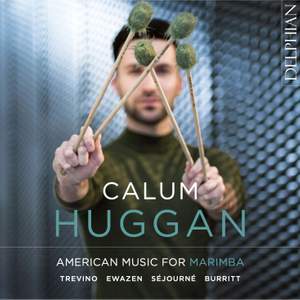 in various ways each of the pieces here – all short bar one, and performed with an elegant, easy virtuosity by Huggan – owes as much to popular songwriting as to traditional classical forms.... — BBC Music Magazine, December 2021, 4 out of 5 stars More…

Trevino: Strive to be Happy

In the burgeoning contemporary repertoire for percussion, the work of a group of North American composer-performers has a special place. Classically trained but influenced as much by rock and jazz as by the Western canon, they have found a stellar exponent in the Scottish marimba player Calum Huggan. Already well known as leading exponent of new music, Calum’s natural instinct for collaboration has led to this landmark first solo album.

In it he showcases the instrument’s full spectrum of expressive possibilities, from Michael Burritt’s sparse and open textures to the generous warmth of Ivan Trevino; premiere recordings by these composers link imaginatively with modern classics such as Eric Ewazen’s Northern Lights and the Frenchman Emmanuel Séjourné's legendary Nancy, which Trevino describes as ‘like listening to my favourite band play an unplugged version of a song I love’.Calum Huggan lets these works ‘speak their truth, quietly and clearly’.

in various ways each of the pieces here – all short bar one, and performed with an elegant, easy virtuosity by Huggan – owes as much to popular songwriting as to traditional classical forms. In soft cascades of sound, Michael Burritt’s opening Prelude I sets a delicate tone that permeates the album regardless of changing moods, emphasising melody and colour.