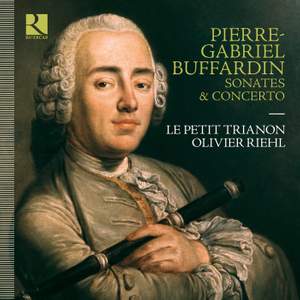 Buffardin: Sonate VI in B minor

Buffardin: Sonate V in A major

Buffardin: Sonate I in G minor

Buffardin: Sonate I in G minor

Pierre-Gabriel Buffardin, a French-born flautist, was active at the court of Dresden. He is known to have been the teacher of Johann Joachim Quantz and a friend of Johann Sebastian Bach, who wrote a few concertante arias for him in his cantatas. He was considered one of the greatest virtuosos of his time. This recording is the world premiere of a recently discovered collection of sonatas. Accompanied by the Concerto à cinq parties, these sonatas represent for the flautist Olivier Riehl and the ensemble Le Petit Trianon a recreational area conducive to enjoyment, combining virtuosity, energy and expressiveness to produce a disc rich in colour and novelty.