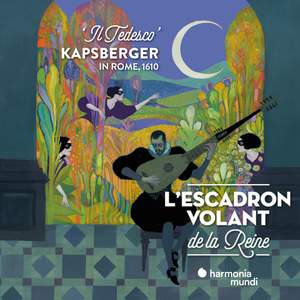 The performances are lively and sympathetic. The singers of this young group show good style and sensitive expression. — Gramophone Magazine, November 2021

Roman accounts of the nobleman Kapsperger reveal a highly eccentric musician: a virtuoso theorbist, a singer, a successful composer, he was said to be arrogant, even irascible.

A character straight out of a novel, as the musicians of L’Escadron Volant de la Reine present him in their first album on harmonia mundi, aided and abetted by a distinguished partner: on this colourful disc, the madrigals, villanellas and arias of ‘Il Tedeschino’ (The German) meet the literary fantasy of the writer Carl Norac.

The performances are lively and sympathetic. The singers of this young group show good style and sensitive expression.