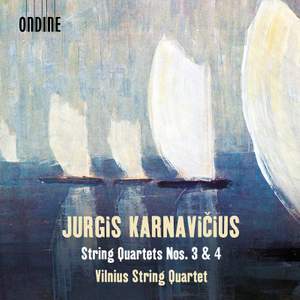 The first volume of the premiere recordings of Jurgis Karnavičius’ (1884–1941) string quartets performed by the Vilnius String Quartet resulted in a growing number of excellent album reviews. It included the composer's romantic and folkmusic-inspired first two quartets. This second volume includes the composer’s last two quartets: Nos. 3 & 4 which are more expressive and modern in nature. Karnavičius wrote his four impressive string quartets during his study and teaching years in St. Petersburg during the 1910s and 1920s, filling the chronological and stylistic gap between the String Quartets of Tchaikovsky and Shostakovich.

Less overtly folk-influenced and more harmonically adventurous than the Lithuanian composer’s first two quartets (which received their world premiere recordings from the same forces last year), these works abound in lyrical beauty and rhythmic vitality and receive incisive, gutsy performances from the Vilnius Quartet who revel in the frequent contrapuntal interplay and soaring lines.