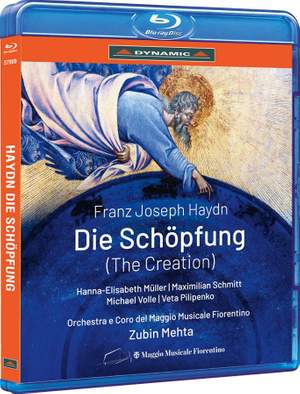 Inspired by hearing performances of Handel’s oratorios during his visits to London, Haydn composed Die Schöpfung (The Creation) in 1798. Through a series of accompanied recitatives, arias, duets and choruses, the music depicts the creation of the universe and the carefree existence of Adam and Eve. Haydn drew on the full complement of his symphonic and vocal prowess which reach peaks of almost operatic intensity. With rich harmonies and sonic magnificence in abundance, Die Schöpfung represents the apex of the Viennese oratorio tradition. It’s a monumental composition with orchestrations of superb richness in which Haydn combines the splendour of classicism with the majesty of sacred music. Large choruses, a sense of momentum and music that's both powerful and refined accompany the listener through the various phases of the Bible‘s account of the Creation, from the explosion of the first light to the marvelous air of the creation of man. To quote Alexander Pereira, superintendent of Teatro del Maggio Musicale Fiorentino: “The Creation conveys a meaning that reaches all the religions of the world equally, and that is why we decided to propose this marvelous masterpiece by Haydn as a sign of unity between all; it is a very important message at this time.”