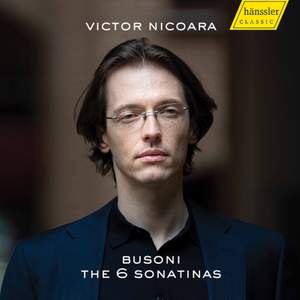 "Ferruccio Busoni was born in 1866 in the Tuscan city of Empoli. His precocious musical abilities became apparent foll owing an early education by his pianist mother. Later he received teaching positions in Moscow, Boston and Helsinki - the I atter of which had a particular significance as it was there that he met his wife Gerda. It was, however, after he moved to Berlin in 1894 that his reputation as a pianistic titan was cemented. Tragically, ill heal th caught up with him and he passed away in 1924. It is the present works that best encapsulate his qua I ities. Composed between 1910 and 1920, the six Sonatinas - the most substantial genre set in Busoni's late oeuvre - span over a decade of experimentation and synthesis. They are bookended by Nuit de Noel ( 1 908) and the Album bl atter ( completed in 1921) in both style and ritual. Born and educated in Bucharest, Romania, Nicoara continued his studies in London at the Royal College of Music. He has featured widely as a soloist, chamber musician and composer. He resides in Berlin."