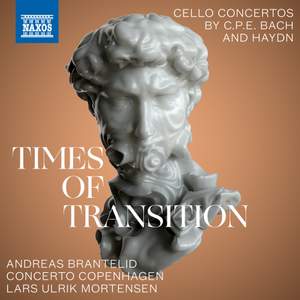 [Brantelid] plays throughout this recording with an outstanding sweetness of tone that does not preclude gutsiness or fantastic dexterity where Haydn’s often demanding writing requires...The... — BBC Music Magazine, November 2021, 4 out of 5 stars More…

The three cello concertos on this disc illustrate that fertile period in the second half of the 18th century when features of the Baroque were gradually replaced by the so-called galant style. Foremost amongst the composers inaugurating this change was Carl Philipp Emanuel Bach whose Concerto in A major is a perfect example of the passionate and dramatic range that marked him out as a pivotal figure of his time. Haydn’s Concerto in C major modulates between older and newer styles, whereas his Concerto in D major is a Classical masterpiece, and a worthy companion to his greatest symphonies.

[Brantelid] plays throughout this recording with an outstanding sweetness of tone that does not preclude gutsiness or fantastic dexterity where Haydn’s often demanding writing requires...The 15-player period ensemble Concerto Copenhagen, directed from the harpsichord by Lars Ulrik Mortensen, accompanies stylishly.

This is a fine recording on all counts. The program is unified, conceptually, around a transitional period in musical style illustrated through a fixed variable, the Austro-German cello concerto. Brantelid is an experienced and versatile soloist, and he integrates a prodigious understanding of performance practice and musical style without sounding wooden or pedantic.