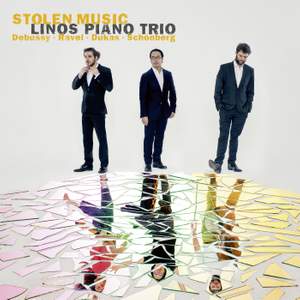 It’s a tribute to the imagination and resourcefulness of the Linos Piano Trio’s arrangements, not to mention their superbly characterised playing, that at no time did I feel short-changed or... — BBC Music Magazine, November 2021, 5 out of 5 stars More…

The LINOS PIANO TRIO, founded 2007, had a tremendously successful market entre with their debut album of CPE Bach complete Piano Trios. The new concept, STOLEN MUSIC, brings back the arrangement of major orchestral works for smaller ensembles. The Linos Piano Trio's own arrangements reflect a deep understanding of the complexity of the major scores.

STOLEN MUSIC will be the first recording of this ongoing project, compiling the highlights from the Linos Piano Trio's existing arrangements, paired with the inspiration for the trio's founding: Schonberg's Verklarte Nacht.

The Linos Piano Trio brings together the members' five nationalities and three musical voices into the single artistic vision of "reinventing the repertoire". Pushing at the boundaries of the trio genre, Linos has, since its inception in 2007, championed hidden gems and created new trio transcriptions, alongside its fresh, personal and visceral performances of the core repertoire.

Praised for its "slow-burning, gripping performance" by The Strad, and "virtuosity, presence of mind, and wit" by Sddeutsche Zeitung, the Linos Piano Trio's reputation has taken it to prestigious stages and festivals internationally. With its pioneering spirit, the trio recorded the first complete recording of C.P.E. Bach's Piano Trios (CAvi-music, 2020) which received several five-star reviews from across the European press.

It’s a tribute to the imagination and resourcefulness of the Linos Piano Trio’s arrangements, not to mention their superbly characterised playing, that at no time did I feel short-changed or wish that I was hearing these works in their original orchestral garb.

Of the three French pieces, the Debussy works a treat in that its inherent languor has ample room to emerge – textures kept light and pliant, with climactic junctures standing in greater relief.