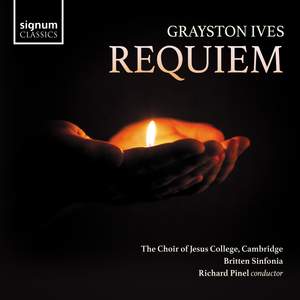 Bill Ives has enjoyed a rich and varied career as both performer and composer (Grayston Ives). These experiences, culminating in nearly two decades as Informator Choristarum (Director of Music) at Magdalen College, Oxford, are reflected in a compositional style which is complex yet accessible, rich and colourful. His choral music comes from the heart, and this deeply personal reaction to the texts enables the performer or listener to engage with and enjoy the music to its full extent.

This recording represents two ‘firsts’ for the choirs of Jesus College, Cambridge: The first time the choir have collaborated on a recording with the Britten Sinfonia, as well as is the first time both chapel and college choirs they have joined forces for an entire album.

Bill (Grayston) Ives writes: “In the Requiem many influences are thrown into the musical melting pot and will be apparent to the discerning listener. Ultimately, the piece is firmly rooted in the Anglican choral tradition (written specifically for liturgical performance), the distillation of a lifetime in music ... The delicate, sweet sound of a pair of tiny hand- held cymbals is heard at the opening and at intervals throughout. They were bought at Snape Maltings from a group of Tibetan monks who were resident there during the summer of 2008 when ideas for the piece were forming.”

This is an important work...Ives, steeped in the Anglican choral tradition, writes magnificently, as might be expected, for his mixed vocal forces. His idiom is tonal, his harmonic vocabulary packed with delicious things.