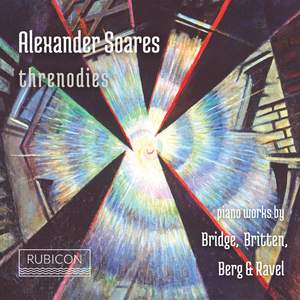 At its centre is the large-scale Piano Sonata by Bridge...It breaks with Bridge’s pre-war tonal language and Soares is clearly in tune with the work’s anguish, making much of the opening’s high-lying... — Gramophone Magazine, October 2021 More…

The extreme social trauma that followed The Great War of 1914-18 engulfed Europe. In this context, English composer Frank Bridge is an intriguing figure: his musical language transformed to embrace a radically new harmonic style. Consequently, his popularity waned and it was not until the end of the century that his importance as a leading modernist was appreciated.

The programme of this album seeks to illuminate the position of Bridge’s monumental Piano Sonata, by setting it alongside works by the composers who influenced it - Berg and Ravel - and his most famous pupil, Britten. Both the sonata and each movement of Ravel’s suite were dedicated to those who fell in the war. Whilst the repertoire on this disc conveys strikingly varied tones, the title, threnodies - a song of lamentation - reflects the essence of these memorials.

Alexander Soares’ debut album ‘Notations & Sketches’, a recital of works by Boulez, Messiaen and Dutilleux, was a Gramophone Magazine Editor’s Choice: “Although most of these pieces have been collated on various anthologies of French piano music, few of them can match this new release in its balanced conception or consistency of execution... Soares has their measure in abundance, resulting in what could hardly be a more auspicious debut album.”

Alexander’s new album is another thought-provoking recital, placing Frank Bridge in the mainstream of 20th Century music where he rightly belongs.

At its centre is the large-scale Piano Sonata by Bridge...It breaks with Bridge’s pre-war tonal language and Soares is clearly in tune with the work’s anguish, making much of the opening’s high-lying bell-like sonorities and unsettling deep chords.