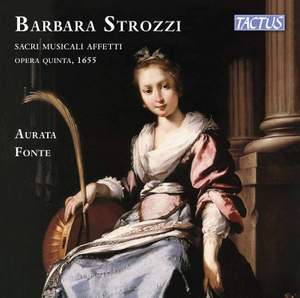 World Premiere recording of the complete edition of the Sacri Musicali Affetti by Barbara Strozzi, a figure of great importance among the various women musicians of the seventeenth century. Her works went on printed editions for her to be recognized and appreciated as a composer, and not just as an instrumentalist or singer. She was on the Venetian intellectual scene thanks to her connection with the poet and playwright Giulio Strozzi (of whom Barbara is most likely an illegitimate daughter), a fundamental figure in the institution of the Venetian musical theater, and soon appreciated by musicians and writers of cultural circles from Venice. The Aurata Fonte ensemble, specialising in the Renaissance and Baroque repertoire, accompanies the sopranos Anna Simboli and Miho Kamiya with period instruments in the performance of this collection of sacred motets for solo voice where the composer's mastery and refinement is revealed by alternating theatrical and dramatic effects in the name of a marked vocal virtuosity. To be noted at one point the explicit mentioning of the great Claudio Monteverdi, placing by right her work in his musical wake.