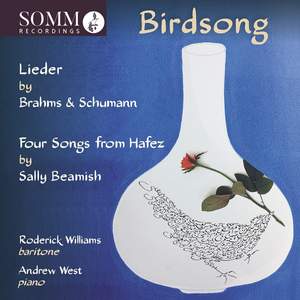 No. 4, Du Ring an meinem Finger

"SOMM Recordings is pleased to announce Birdsong, a fascinating crossgender exploration of art songs associated with the female voice by baritone Roderick Williams, accompanied by pianist Andrew West. The recital features signature songs from the height of Romanticism by Brahms and Clara and Robert Schumann alongside a more recent quartet of sensuous songs by Sally Beamish. In his revealing foreword, Williams recalls having his choice of Brahms’s Sapphische Ode refused by competition organisers because it was “a woman’s song”. Returning recently to the work prompted him to question why some songs are considered gender specific. Birdsong is his response."

Williams seems to be on a new level with his command of the German texts and complete cognitive grasp of what he is singing.

Williams is a singer who just gets better and better. The way he spins velvety lines in Brahms’s An die Nachtigall and Sapphische Ode, making every syllable meaningful, is something to savour.