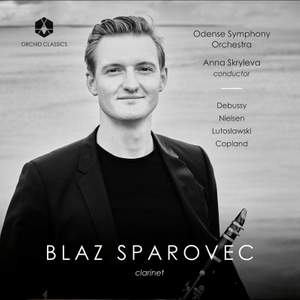 Šparovec’s breath control, colour palette, ease of articulation and warmth of tone are little short of dazzling. These qualities are all displayed in music that largely delights in being mercurial...And... — BBC Music Magazine, September 2021, 4 out of 5 stars More…

I. Slowly and Expressively

Orchid Classics presents one of two releases showcasing winners of the Carl Nielsen Competition 2019. Hailed as ‘One to Watch’ by Gramophone magazine, Slovenian clarinettist Blaž Šparovec was praised by jury member Michael Collins as “the deserving winner … he showed immense qualities from the start and is able to communicate with the audience his joy of music-making. His technical skill and warm sound will make him stand out as a true individual.” With the Odense Symphony Orchestra, Blaž Šparovec performs four masterpieces: Debussy’s breathtaking Première rhapsodie, written as a competition piece for the Paris Conservatoire; Nielsen’s Clarinet Concerto, often described as the greatest of the 20th century; Lutosławski’s folk-like Dance Preludes; and Copland’s demanding, jazzy Clarinet Concerto, performed in its original state – unaltered by simplifications made by its dedicatee, Benny Goodman.

Šparovec’s breath control, colour palette, ease of articulation and warmth of tone are little short of dazzling. These qualities are all displayed in music that largely delights in being mercurial...And the final icing on Orchid Classics’s cake? The depth and vibrancy of Preben Iwan and Mette Due’s recording, which enhances every musician.

Lutosławski’s Dance Preludes…have a real spark and pungency – you can feel the adrenalin rush. Copland’s Clarinet Concerto really suits the Slovenian. His narrow, wiry tone is beautifully controlled in the tender opening movement and there is plenty of sass in the jazz-infused finale.

Šparovec portrays the irascible character of the clarinet in its duels with the snare drum in the orchestra vividly [in the Nielsen].