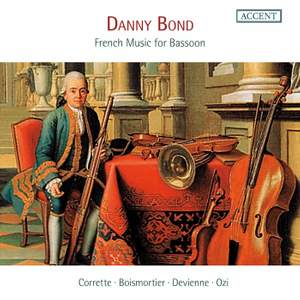 Like the oboe, today's bassoon has its roots in France. No wonder, then, that it developed its own repertoire early on, not infrequently written by virtuosos on the instrument.

The American baroque bassoonist Danny Bond, who is active in many of Europe's leading early music ensembles, dedicated three CDs to the French repertoire for solo bassoon on ACCENT between 1983 and 2000.

The first CD highlights the French Baroque with works by Michel Corrette and Joseph Bodin de Boismortier, while the other two CDs present works by two Mozart contemporaries, Francois Devienne and Etienne Ozi, who were themselves celebrated bassoon virtuosos.