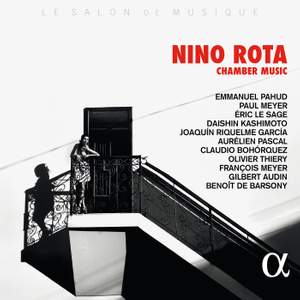 [Rota] spent several decades working on-and-off on his five-movement Nonetto and, as such, it offers a tribute to the Italian composer’s changing styles. It receives a glorious outing here at... — BBC Music Magazine, October 2021, 4 out of 5 stars More…

I. Allegro quasi in 1

Nino Rota was not only the man who wrote film scores for Fellini (La strada etc), René Clément and King Vidor. He was also a twentieth-century great composer. A child prodigy, he studied in America with Fritz Reiner, crossed paths with Toscanini, Igor Stravinsky and many others. Éric Le Sage, Emmanuel Pahud, Paul Meyer, Daishin Kashimoto, Aurélien Pascal and their partners from the Salon de Provence festival pay tribute to his music with the Piccola Offerta Musicale (Little Musical Offering), composed in 1943 at the age of twenty-two, alongside a Nonet and a Trio for flute, violin and piano, both written in the late 1950s. The Trio for clarinet, cello and piano (1973) comes from Rota’s last creative period and has all the characteristics of his mature works.

[Rota] spent several decades working on-and-off on his five-movement Nonetto and, as such, it offers a tribute to the Italian composer’s changing styles. It receives a glorious outing here at the hands of Eric Le Sage, Paul Meyer and Emmanuel Pahud’s collective...Both Preludes Nos 2 and 13, which Le Sage plays with soul and restraint, have the air of 19th-century salon music.

The stand-out score on this CD is the five-movement, 26-minute Nonet...Neoclassical in style, yet brimming with originality, it resembles a comic opera without words. If Rossini and Poulenc had found a way to collaborate through a spirit medium, something very much like Rota’s Nonet might have been the outcome.

All of the performances here by Alpha’s distinguished line-up of musicians are as involving as they are virtuoso, and the recording is clear and well balanced. If the programme appeals, don’t hesitate.

If (like me) you know the Italian composer predominantly through his film-scores, this superbly-played collection of his chamber works will yield a wealth of delightful surprises – there are whispers of Ravel in the early Piccola Offerta and shades of Stravinsky in neo-Classical mode in the outer movements of the earworm-packed Nonetto, which also boasts an enchanting and imaginatively-scored set of pastoral variations.

While you can see why Rota was a gifted film composer, in the stylistic fluidity and quick shifts of mood, this music more than stands alone and should be on the menu of every concert hall.