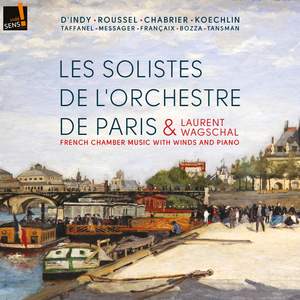 Chabrier: Larghetto for Horn and Orchestra

Bozza: Fantasy for bassoon and piano

The Orchestre de Paris soloists - who else could have been better suited to record the French school of winds most symbolic pieces. The tradition began, in second half of the 19th century, following the tremendous progress of modern instrument manufacturing, with such colorful and singular timbres. The programme retraces the evolution of this magnificent repertoire, from Roussel, Chabrier, and D’Indy to Bozza, Tansman and Françaix.