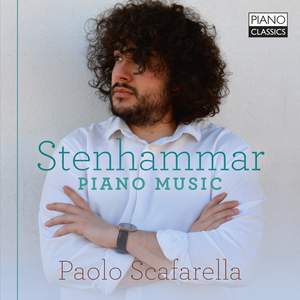 Carl Wilhelm Stenhammar was born in Stockholm, Sweden, where he received his first musical education. He went to Berlin to further his studies, becoming a glowing admirer of German music, particularly that of Wagner and Bruckner. However, it is rather in Beethoven, Schumann and Brahms that we can trace the major influences of the young Stenhammar, who later broke away from the German model to impregnate himself with the music of his Swedish compatriots (starting with Berwald) and especially Sibelius and Nielsen.

Stenhammar was the finest Swedish pianist of his time and he wrote four sonatas and two concertos for his instrument. Rediscovered in 2008, the Sonata in G minor (1890) is the passionate, Schumannesque work of a nineteen-year-old full of romantic transport but already a master of the form. The three cycles of character pieces included in this recording (the 3 Fantasies Op.11, Nights of Late Summer Op.33 and Three Small Piano Pieces) show a distinctive musical voice, full of passion, lush harmonies and sensuality, evoking the mysteries of the Swedish countryside.

Italian pianist Paolo Scafarella (b. 1993) has taken up the cause of Stenhammar, planning to record the two piano concertos and the piano music of the Swedish master.