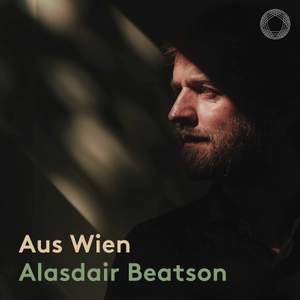 Much thought and care have gone into devising this musical love letter to Vienna from Scottish pianist Alasdair Beatson. — Gramophone Magazine, October 2021 More…

After his acclaimed Mendelssohn album with cellist Johannes Moser, Alasdair Beatson presents his first PENTATONE solo album Aus Wien, on which he brings together piano music from Schubert, Schumann, Schoenberg, Korngold and Ravel. Ranging from treasures of late-Romantic and early atonal music to carnivalesque, grandiose dance pieces, the works on Aus Wien constitute a picture of the vibrant city of Vienna, a hub of musical creativity without parallel, and the capital of the waltz. Alasdair Beatson works prolifically as a soloist and chamber musician, and is renowned as a sincere musician and intrepid programmer. Aus Wien is his second PENTATONE release.

Much thought and care have gone into devising this musical love letter to Vienna from Scottish pianist Alasdair Beatson.

The Scottish pianist proves a congenial and enlightening guide on this whistle-stop tour through nineteenth- and twentieth-century musical Vienna, emphasising the proto-modernity of Schumann’s Faschingsschwank aus Wien (where the clarity and vigour of his playing is quite dazzling) and the lyricism of Schoenberg’s Kleine Klavierstücke. The crowning jewel on the programme, though, is Korngold’s rarely-recorded Piano Sonata No. 3, with one eye on Schubert and another on Hollywood.

Beatson pinpoints each style while making the whole thing hang together beautifully.